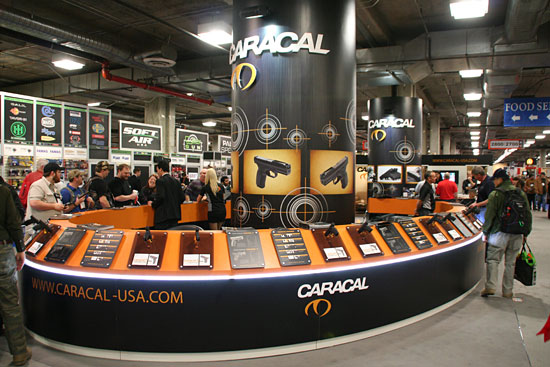 Caracal appears to have shaken up the entire product line. Â Some guns are out, while other new guns are now being shown. Â Here is a quick break down of all of the changes, along with links to detailed information on each of the new guns.

In the handgun category, the old “F” and “C” pistols appear to have changed names, and the addition of a sub-compact pistol to the line has appeared. Â They are the CP660 (full size), CP661 (compact) and CP662 (subcompact) pistols. Â All three of these guns are chambered in the 9mm.

There are also two new handguns that appear to be completely different designs from the original striker-fired handguns Caracal produced. Â The first is the CP663: a double-action, hammer-fired pistol. Â The second pistol is the CP664: a compact striker-fired pistol with a manual thumb safety. Â Click here to read more about the new Caracal pistols.

Handguns were not the only products seeing significant changes. Â Previously, there were three rifles/carbines shown by Caracal: Â the CSR, the CC10 and the 816. Â Of those, only the 816 remains in the catalog. Â Newly introduced are the CH300, CS50, CS 338 and CS308 rifles. Â Click here for information on the CS50, here for details on the CH300 and here for info on the CS308 and 338.

At the time of this writing, the Caracal USA site is redirecting to the main Caracal UAE site. Â On the UAE site, it notes that the USA site is “under development.” Â Perhaps the new USA site is being updated with all of the new product information. Â There is no telling which of these new guns will be imported into the United States. Â As the US consumer market is one of the largest, if not the largest, firearms markets, I would expect that Caracal has a great deal of financial incentive to get ATF import approval on these firearms.

I expect the Caracal booth will be quite interesting at next year’s SHOT Show.

Introductions of new guns is part of the normal activities of a manufacturer. Â However, changing the names of existing gun lines and eliminating a number of existing lines mid-year is somewhat noteworthy.

Caracal issued at least two recalls on their pistol. Â Changing the name of the pistol models could be an attempt to distance the product from the bad publicity, but there is no telling.

Thanks for posting the catalog. Interesting stuff there, but with the complete recall on the C pistols, I don’t think I’ll ever buy any of their stuff.

Can’t wait to get to the Shot Show and see the new guns in person.

Four shameless plugs in one day for a company that just had to admit that its pistols will explode in your hand. Guess it didn’t take Caracal long to realize that The Firearm Blog and Guns, Holsters, and Gear are for sale.

Reporting on new lines of firearms is a significant part of this website, just as reporting on the recall of the complete C line of Caracal pistols is. GHG has never taken advertisement money or any other form of compensation from Caracal.

Cool photo. From the SHOT Show?