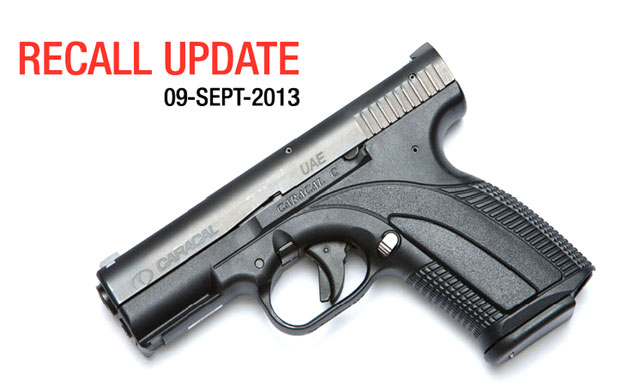 Caracal announced today a recall of every C model pistol the company has ever made.  The recall is not limited to any specific serial numbers or market.

The safety issue(s) with the Caracal C cannot be fixed according to information released by the company.  No guns will be repaired and/or returned to the purchaser.  Caracal is offering a full refund of the original purchase price or vouchers for other Caracal products.

This recall is an extension of the recall announced in March 2013 for a limited number of Caracal C pistols.  Caracal stated after investigating the problems, the company initiated a recall of all C pistols “because the safety of its customers is paramount.”

Caracal states in the recall notice that owners of the C should not load or shoot the pistols.  While the guns appear to be unsafe, one wonders if holding on to one as a collector’s item would be smart.  You would have to accept that you should never shoot the gun again, but would the gun be valuable to collectors at some future date?

This recall announcement comes right after Caracal announced the introduction of a completely new handgun line.  Three of the new Caracal pistols are updated versions of the original F, C and SC models.  Those pistols have been given new names:  CP660, CP661, and CP662.   Click here to read more on those new pistols.

Caracal announced a safety recall on the F and C series pistols.  It seems there is a potential problem with the trigger unit that would allow for the pistol to fire if dropped.  According to Caracal, no one has been injured from this problem (good), and it would seem that they would like to prevent any injuries by initiating this voluntary recall.

The bad news is that right now it will take about three months for Caracal to receive replacement parts for their US customers.  Once the parts come in, then owners can contact Caracal to schedule a date the pistols can be shipped back for repair.  That is a long delay to get the guns just scheduled for a fix.

I suspect that the problem is something that just recently came to their attention, and the engineers had to design a replacement part.  Once designed, it will take a few months to get the parts rolling on the assembly line and get them in hand.  It sucks, but I can understand the delay if this is the case.

I did say there was good news, right?  Well, Caracal is stepping up and doing the right thing.  If you own a Caracal pistol covered by this recall, and you do not want to wait for a repair, Caracal is saying they will give you a full refund on the gun.  That is something I don’t see many companies offering to do anymore.  Caracal just moved up a notch in my estimation for this move.

Let’s face it: every new gun can have unexpected problems pop up.  An accidental discharge from being dropped is a serious problem, and offering a complete refund on the pistols if you don’t want to wait for a repair shows me the company is serious about standing behind its products.

If you want to keep your pistol and have it repaired, Caracal is offering you a bonus.  They will send you an extra magazine, ballcap, t-shirt and a voucher for 15% off the purchase of another Caracal product.

[…] the past, your information may have been compromised. For example, if you had purchased one of the ill-fated model C pistols, your details may be on file with Caracal when you returned the gun for a […]