Update: I would caution everyone to watch the video review of the MPAR-556 Gen II from Full30. The gun looks like it has some problems, and I would be uneasy spending my money on one of these.

MasterPiece Arms announced the addition of a AR-type pistol to the company line up. Â The new MPAR 556 pistol is not-surprisingly based on the company’s MPAR 556 rifle. Â It is chambered for the 5.56 NATO cartridge and will also fire the .223 Remington.

The pistol retains many of the same features found on the rifle version of the gun. Â For example, the MPAR 556 pistol uses a self-regulating, short stroke piston system. Â This means that the pistol version of this gun does not have a buffer tube sticking out of the back of the gun, which is typical with many AR-type pistols. Â It also means, in theory, that the gun will run cooler and cleaner than a direct gas impingement system.

Although the gun is shown with folding sights, none come with the gun. Â The upper has a Picatinny rail for mounting an optic or iron sights (or both.) Â There is a rail on the bottom of the handguard. Â Shooters can also place rails on both sides of the handguard.

An angled fore grip comes standard on the pistol. Â It looks like a Magpul AFG, but I have not confirmed that. Â Some people will suggest that this makes the gun an AOW for the purposes of the National Firearms Act. Â I would tend to agree with that assessment. Â However, according to MasterPiece Arms, they have an ATF opinion letter on file stating that the pistol is not an AOW. Â I don’t know if the angle of the grip makes some difference in the ATF opinion. Â This would not be the first time the ATF has done something weird when applying a bad law. 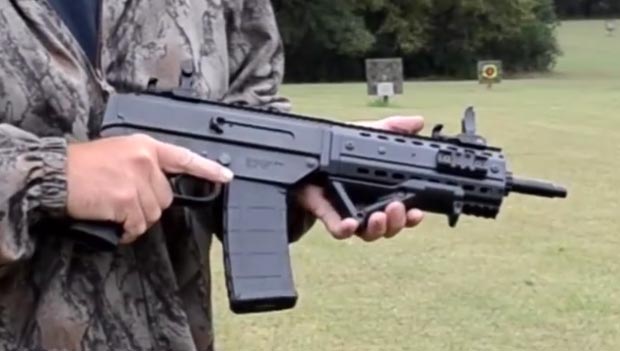 A 30-round magazine comes with the gun, and I suspect that most/all AR-15/M-4 magazines will work with the MPAR 556 pistol. Â Additional information on the gun can be found here. Â MSRP is $899.99. I expect that we will see this gun at the SHOT Show in January. Â I’ll try to get more photos for everyone, along with any other information you might want.

It looks like MPA no longer makes the MPAR 556 rifle or pistol. In fact, it appears the company is no longer making any pistol or rifle beyond bolt action designs.

So, not to be a complete idiot, these are legal? How cool is that. Can you put a stock on it for better aiming? Can I buy one of these for my husband?

Under the law, It doesn’t matter if you have a fore grip on a pistol, Just as long as you do not have the ability to add or mount a butt stock,

“Under the law, It doesnâ€™t matter if you have a fore grip on a pistol, Just as long as you do not have the ability to add or mount a butt stock”

Wrong .You cannot have a vertical pistol grip.BATF has said a angled grip is ok as it is not a vertical grip.Yes you can hold it like a vertical grip and not break the law.If you put a vertical grip on you are breaking the law and making a AOW.Sig sells their P556/516 with a round disc on the back that if you fill a form-1 to make a SBR you can remove and add a ar-15 tube too and your choice of stock.

I have been dealing with Class III weapons for 40ty years, And a front pistol grip, straight or angled does not change the weapons status to AOW, Pistol or Rifle, Now the length of the Barrel, Under 16 inches for a rifle, 18 inches for a shotgun, Does change status to SBR or Shotgun.

Your wrong .Pistols cannot have a vertical grip.