There are a variety of gun trade shows throughout the world. Â We have had the opportunity to send writers to several of them during the past few years. Â Click the following links to access all of the articles we wrote, photos we took, and videos we made at each of the events. 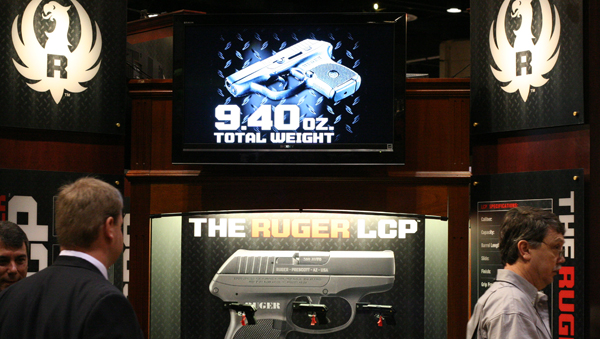 The Shooting, Hunting and Outdoors Trade Show is more popularly known as the SHOT Show. Â Since 1979, the National Shooting Sports Foundation (NSSF) has organized this firearms industry event that brings retailers and manufacturers together to do business.

The SHOT Show is not open to the general public, but they are open to the media. Â We’ve done our best to bring our readers the latest news from the show. Â We started with articles and photos, but have since added a lot of video to our coverage. Â Our plans for future shows will blow you away.

Every year, on the day before the official start of the SHOT Show, we attend a media only event called Media Day at the Range. Â This event is restricted to a select few members of the media, and puts the press onto the range with manufacturers. Â It is there we get the first chance to put rounds downrange with brand new guns not seen in public before.

The National Association of Sporting Goods Wholesalers hosts the Annual Expo and Meeting at various locations around the United States. Â This show is different than the SHOT Show as it is intended to bring together manufacturers with wholesalers, not retailers. Â This means the show is not as crowded at SHOT, and there are fewer exhibitors as some companies do not work with wholesale distributors.

The good thing about the NASGW show is media members of NASGW are allowed to attend. Â 2012 will be the first year that our writers will be at the show, bringing you information, photos and videos of new guns being show to the distributors before SHOT.

The official name of the NRA Show is the NRA Annual Meetings & Exhibits. Â The show is a traveling show, moving from city to city across the United States so they can reach the maximum number of NRA members over time. Â The exhibition features all of the major gun manufacturers and many smaller startups. Â If you want to see all of the greatest guns being made today, this is one event you should attend.

The show is more than just anÂ exhibitionÂ of firearms. Â The annual meetings are some of the most important parts of the entire event, as they set the tone for the organization in the coming year. Â In addition to internal structural organization, the meetings often feature keynote speakers such as pro-gun celebrities and politicians.