Two short months before the annual SHOT Show, Ruger announced the release of the new SR-762 rifle. Â Maintaining the overall look and feel of the AR platform, the new Ruger SR-762 rifle is chambered in 7.62×51 (aka .308 Win) and uses a piston system similar to the company’s original SR-556 rifle. Â The rifle appears to have a number of desirable features, plus ships with a number of accessories.

END_OF_DOCUMENT_TOKEN_TO_BE_REPLACED

One of the first new guns announced for 2014 is the MPA 308BA from MasterPiece Arms. Â The information on the new gun is limited, but there is enough to make the gun sound very interesting.

TheÂ MPA 308BA is a bolt action rifle with a Remington 700 bolt design. Â The rifle will have detachable magazines and initial models will be chambered in .308 Winchester. Â Although no other calibers are mentioned, I would expect that demand would drive development of other calibers.

END_OF_DOCUMENT_TOKEN_TO_BE_REPLACED

In the most recent earnings call, Smith & Wesson indicated the new M&P10 rifles are selling very well. Â As is typical for the company, S&W did not release any numbers for units sold or for how many are on backorder. Â However, it seemed plain that the rifles are doing very well in the company’s line-up.

END_OF_DOCUMENT_TOKEN_TO_BE_REPLACED

MG Industries (MGI) manufactures a modular rifle system that takes the basics of an AR platform and allows you to swap calibers quicker than many people change underwear. Â Too cliched? Â Perhaps, but true nonetheless. Â Let’s face it some folks change underwear a little slow and not frequently enough.

MGI is now making a rifle and a caliber conversion for the .308 Winchester cartridge. Â The rifle will have an 18″ quick change barrel with a 1:10 twist. Â Total weight is less than eight pounds.

END_OF_DOCUMENT_TOKEN_TO_BE_REPLACED

An exciting new rifle, the Kel Tec RFB, is expected to ship the carbine model in December 2008.Â  This rifle has been one of the moreÂ eagerly anticipated firearms in 2008.

The RFB is a 7.62×51 NATO (.308 Winchester) semi-automatic rifle that will be offered in two models: carbine with a 18″ barrel and target rifle with a 32″ barrel.Â  The “bullpup” design rifle accepts FAL magazines.Â  All controls are ambidextrous and the rifle ejects fired brass forward making this firearm equally shootable for left and right handed shooters.

The Kel Tec RFB rifle will be shipping early next month (Feb 09) according to a Kel Tec representative at the 2009 SHOT Show.Â  The rep was very upbeat about the rifle, stating they are in production now and will be shipping very soon.

I had a chance to handle the RFB, and I have to admit I was impressed.Â  The rifle, chambered in .308/7.62 NATO, is hefty, but very well-balanced.Â  Kel Tec had several different configurations of the RFB on display, and everyone stopping to check them out seemed to like them.

The Kel Tec RFB (Rifle, Forward-ejecting Bullpup) is shipping, though slower than had been expected.Â  It seems there are some issues with the heat treating process, which have prevented manufacturing the RFB in large quantities.Â  Specifically, Kel Tec states:

Kel Tec also stated they were showing a suppressed RFB at the Advanced Armament Corp. (AAC) Silencer Shoot.Â  A suppressed RFB would be a fun rifle to own.

The Kel-Tec RFB Sporter will be introduced at the 2012 SHOT Show if the rumors I am hearing are correct. Â From what I hear, the mid-sized RFB will feature the 24″ barrel, putting it between the carbine and target models.

I don’t have exact specs, but the new rifle should weigh about 9.5-10.0 pounds and have an OAL of about 32″. Â It should otherwise look and work just like any other RFB (forward ejecting, etc.)

Even though the “Hunter” version of the RFB Â got more attention, the Kel-Tec RFB 24 was introduced at the 2012 SHOT Show. Â The RFB 24, also known as the Sporter model, is a forward ejecting, 7.62×51 chambered rifle in a bullpup configuration with a 24″ barrel.

Kel-Tec is now showing the RFB rifle in tan. Â Previously, I have only seen the RFB in black, but at the 2012 SHOT Show, the company had a tan model on display. 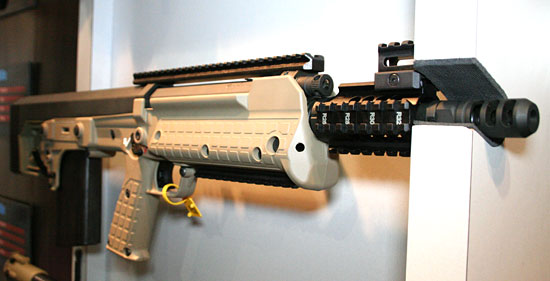 Unfortunately, the woman representing Kel-Tec at the booth did not have any information on the gun. Â So, for now, we will have to wait and see if/when they ship.