In the most recent earnings call, Smith & Wesson indicated the new M&P10 rifles are selling very well. Â As is typical for the company, S&W did not release any numbers for units sold or for how many are on backorder. Â However, it seemed plain that the rifles are doing very well in the company’s line-up.

Smith & Wesson introduced the M&P10 at the 2013 SHOT Show in January. Â Similar in design to the AR-15 platform the M&P10 is a gas operated, semi-automatic rifle chambered for the 7.62×51 cartridge. Â It will also fire the .308 Winchester.

The gun is set up with an ambidextrous magazine release and bolt catch, which is a nice feature for the southpaw shooter. Â The shells still eject to the right, however.

The gas block has a short Picatinny rail instead of a fixed post sight. Â While this does require the shooter to purchase a front sight if irons are to be used, it does offer the shooter the flexibility of picking exactly what he or she wants. Â Considering a lot of people will be adding glass on the rifle, having a front sight that folds down is preferred by many shooters. 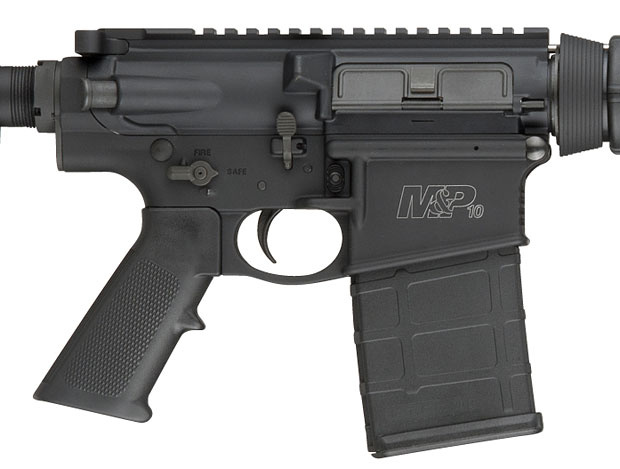 In the call, no one from S&W made any specific announcements of new products, rather saying that when the time and market conditions are right, they will release new guns. Â Assuming the M&P10 is selling well, I would not be surprised to see new versions of the rifle at the SHOT Show in January 2014.

[…] of the more popular things in the AR-market right now is the .308 caliber rifle. Â Smith & Wesson launched a new line of them in January, while Ruger recently announced their own SR-762. Â According to the company […]