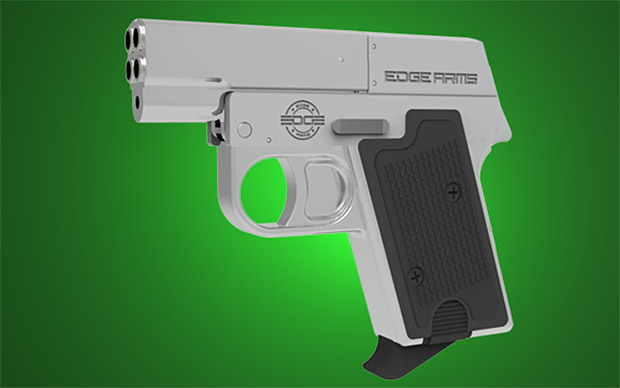 I find the new Edge Arms Reliant pistol to be a very intriguing concealed carry handgun. Â It is a four barrel, subcompact pistol chambered in .22 WMR (aka .22 Magnum). Â A second pistol chambered in .17 HMR will also be manufactured. Â The pistol uses a break open design, not unlike the DoubleTap pistol.

A lack of a slide, cylinder and external hammer means the gun can be reliably fired from a concealed location (such as from within a jacket pocket*) or in contact with an assailant’s body with little chance of malfunction. Â Edge Arms highlights this fact on the company’s website, stating “Â shoots every time, cannot jam from ammo misfeed or ejection.”

While not as powerful as many centerfire cartridges, the .22 Magnum is not to be trifled with. Â The Edge Arms Reliant barrels are 2.89″ long. Â Checking Ballistics by the Inch, .22 WMR loads run about 1100 – 1300 fps from a 3″ barrel. Â Four shots of this will likely handle many defensive firearms situations. Â And for a gun of this size, the .22 Mag is going to be much softer shooting than a .40 S&W.

One issue that subcompact pistol designers content with is safety. Â Whether true or not, many people feel that a smaller gun runs a greater risk of negligent or accidental discharge. Â To contend with this perception, pistols in this size range are often outfitted with heavy triggers. Â Edge Arms specs the trigger pull at 8-10 pounds, which is a vast improvement in my opinion.

The Reliant has the option of having a built-in green laser aiming device. Â This would really help overcome one of the inherent problems with many small guns – aiming. Â Some of the ultra-compact handguns have tiny, nearly impossible-to-use sights, relegating the guns to extreme close quarters defense. Â With a built-in laser, the Edge Arms Reliant could be used at longer distances with a high degree of accuracy. Â Plus, by using a green laser instead of a red one, the aiming device would be daylight visible. 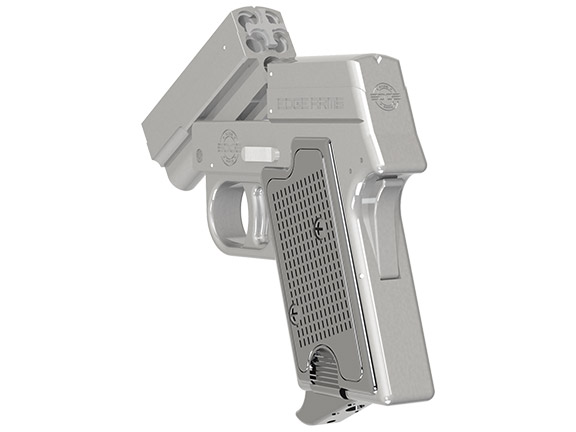 Edge Arms states the laser is grip activated. Â It appears the gun has a device that looks like a grip safety. Â I am guessing that the “grip safety” is actually the laser activation switch.

No MSRP has been announced, and a shipping date has not yet been given.

It was recently brought to my attention that a few people didn’t understand why one would ever fire a firearm from a jacket pocket. Â I will explain.

Self-defense situations typically happen very quickly, with the aggressor often having the advantage of speed and surprise. Â The faster a defender can respond, the more likely he or she will be able to survive the confrontation. Â During the winter, many people will wear a jacket with large pockets to warm the hands. Â These pockets can also be used to conceal a handgun.

If you are dealing with an unknown situation, you can have your hand already on the gun without displaying it to anyone. Â Should the situation warrant it, you can even fire the gun through the jacket to defend your life. Â Having a hand on the gun decreases the time needed to bring a gun into play. Â Shooting through the jacket eliminates the draw time. Â Obviously, shooting through a jacket is only useful at very close distances, but that is where a lot of violent encounters happen.

The pocket liner can get hung up in a normal semi-automatic handgun as it cycles, rendering it useless beyond the first shot. Â The exposed hammer on a revolver can also be fouled by the jacket. Â A “hammerless” revolver typically works well from a pocket, but even it has a moving cylinder, which can present a problem on occasion. Â An enclosed system, like the one used in the Edge Arms Reliant pistol, offers the best possible reliability in such circumstances.

Update: As near as I can tell, the company went out of business. If anyone has more information about what happened, I’d love to hear about it in the comments section below.

Where can the Reliant be purchased?

I believe the company went out of business. I do not know how many (if any at all) made it into the market. IF any exist, Gunbroker might be the best place to find them.