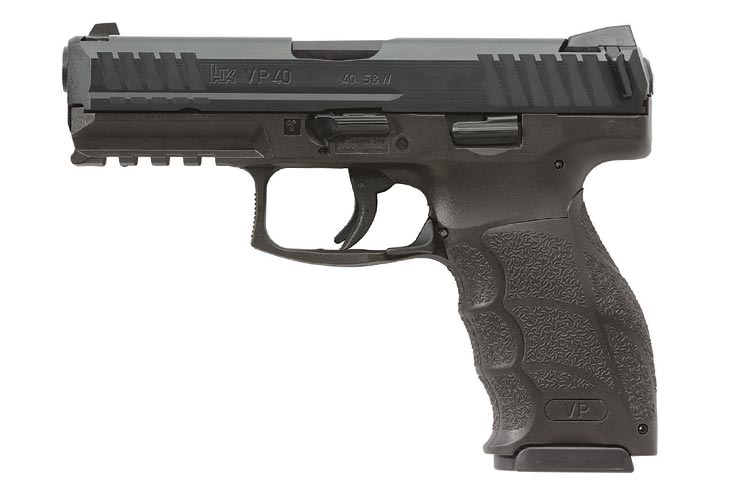 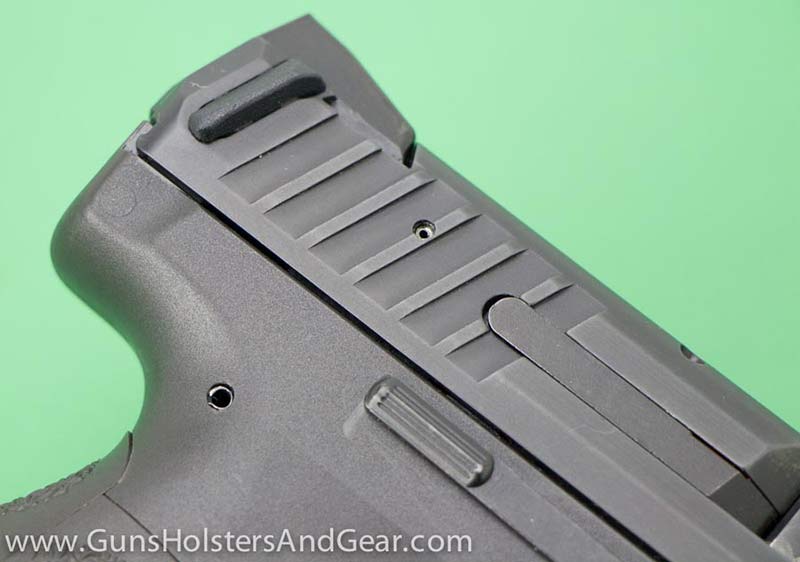 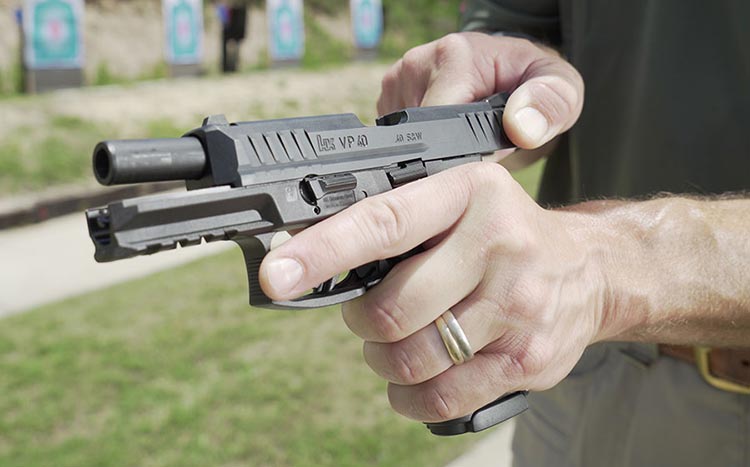 The grip is fully adjustable with replaceable backstraps and side palm swell grips. In my review of the VP9, I found this system to be very good for making the gun nearly perfect at adapting to the shooter. The swappable backstraps offered by other companies work well, but by adding the adjustable side panels, HK takes things to a much more preciseÂ level. 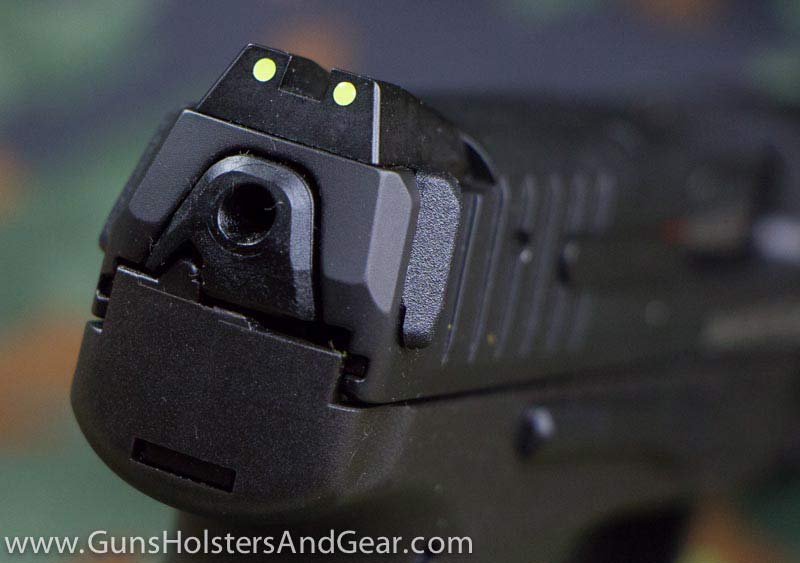 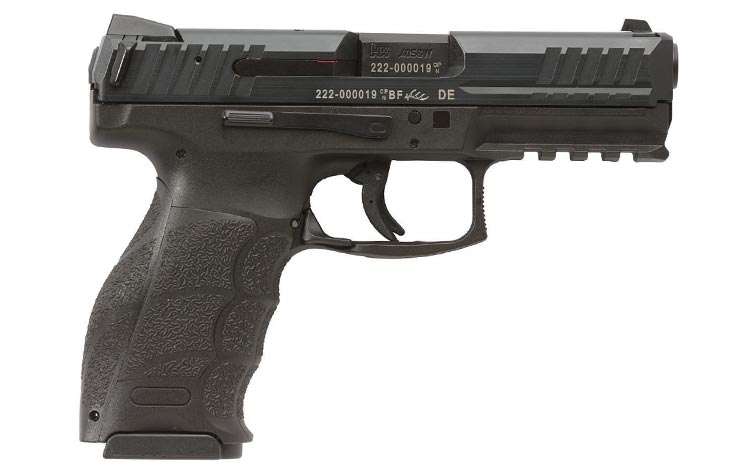 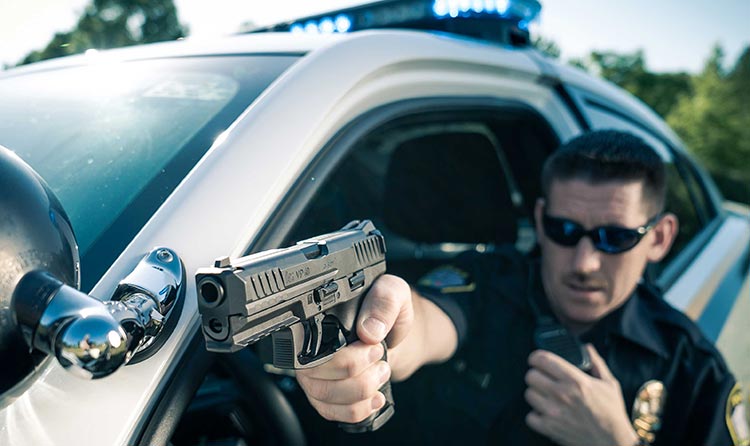 The VP-series of pistols are excellent choices for law enforcement use. HK hopes toÂ expand its footprint in the police market with this .40-caliber handgun. The VP40 will be sold to law enforcement agencies with night sights and three magazines.

We are now making holsters for the HK VP40!

Thanks for the update. How much of a difference are you seeing the slide width make as far as holster fit? Any chance a VP40 will fit into a Kydex VP9 holster?

The VP40 will not fit in the VP9, there is too much of a size difference. The kydex just doesn’t allow that much give.

I own the HK VP9, and the VP40. Both are very easy to learn to shoot, very reliable, and totally ambidextrous. These 2 firearms are almost identical in form and function. Including the clips, they are interchangeable, you can load 9mm in the 40 clip, and 40’s in the 9mm clip. However you can see the inherent danger in this if you’re not paying attention. I know the VP9 will not chamber the 40, it will just jamb. However the VP40 WILL chamber a 9MM, I know it will, because I tried it. I’m sure I don’t need to tell you what may happen next if you pull that trigger. I caution anyone with both of these excellent firearms, DO NOT mix up your clips, and or ammo. Your firearm will jamb,or you may destroy your barrel, and very possibly injure yourself if you do. Most importantly, your firearm will fail you when seconds count.
PS. Ammo,,Buy it cheap,,stack it deep.

Magazine, not clip. The words are not interchangeable.

I think most people understand the point that I was attempting to convey. If all you have to offer to the discussion are vocabulary corrections, please go to a spelling bee blog.

It was a terminology correction, therefore a spelling bee blog wouldn’t be useful. If you’re a gun guy, use the correct damn terminology.

I’m attempting to warn people about a potential danger of owning these 2 firearms together, and you want to hassle me on terminology? I would appreciate it if you did not re post,,,because you’re terminology correction is completely irrelevant. And if I want to call them clips, I will, and if you don’t like it, TOO BAD, go TROLL somewhere else grammar Nazi.

Go people who own multiple caliber Glocks screw this up? Eat a bag of unwashed dicks.

I appreciate you as a reader, but I would ask that you refrain from personal attacks and vulgarities on my site.

A clip refers specifically to stripper clips such as ones used in the M1 Garand and WW2 era rifles. The name stuck around with some and is still used but technically is incorrect. Like calling a computer a typewriter. Same with gun. There’s pistols…then there’s rifles and your gun, one is for shooting and one is for fun. Any Marine knows that ditty I’m sure.

Yeah! I know, I typed it out fast and did not realize until after I posted it. Sorry, a common mistake Im sure.

Yeah, magazines to clips, simple mistake, I typed it out fast, however it really is irrelavant to the information I was trying to pass on.
However, that 1 mm, will cause a 9mm handgun loaded with .40 to jamb. And the .40 handgun pushing the 9mm will probably ruin the barrel, and jamb/stove pipe after every shot. I care, because I demand my firearm to work every time I need it, or my life depends upon it.

You missed my sarcasm there Steve, of course it makes a difference which is why I pointed it out. You did make an excellent point though, two identical looking guns with the same magazine is a recepie for disaster. I was about to buy the new VP40 but I would probably shoot both guns together and eventually an accident could happen or somebody could talk to me as I am loading mags. Going to have to pass on that, don’t want to blow up a gun.

These are awesome hand guns! I have over 1.5k rounds through the VP9 now, and 600 through the VP40, I cannot tell much of a difference in drift, or accuracy, or recoil. I cannot wait till HK expands this to the .45,,,or .50? :-O
I used to carry VP9 all the time, even with basketball shorts, no one can tell. But now I’m starting to carry the VP40 more than the 9. I will never give either of them up, they are with me for life (maybe a couple new barrels are in order).

Just like many people use the term ‘rim’ interchangably with wheel, even though technically they are different.

Lighten up, and stop being so technical.

A clip and a magazine are two entirely different things. A clip is a device that is used to store multiple rounds of ammunition together as a unit, ready for insertion into the MAGAZINE or cylinder of a firearm. They are not interchangeable.

The defining difference between clips and magazines is the presence of a feed mechanism in a magazine, typically a spring-loaded follower, which a clip lacks.

No, you are wrong. What you are talking about is a STRIPPER clip.

Stop being so damn uptight, and get over yourself.

Clip and magazine are the same thing, in this context.

Hey you pretentious snob, did you know that a MAGAZINE is also a bound set of pages with that people read, with words and pictures???

Great review! I saw this gun at a gun show two days ago ($680) and it had a different rear sight. The rear sight had a raised edge so you could cycle the slide on your belt if needed…a very nice feature! I have a Walther PPQ and a HK VP9 and I prefer the HK VP9 for carry over the PPQ due to the shape of the slide. Sure the PPQ fits my hand slightly better and has a slightly better trigger but my hand slips while trying the cycle the slide at the range under perfect conditions and my hand has not slipped while trying to cycle the slide of the HK VP9. The only issue I have had with the HK VP9 was wishing it was chambered in .40 or .45acp. Looks like my problem has been solved and there may be a HK VP45 also in my near future. Time to go sell my M&P in .40!