Ruger quietly updated the SR-556 Takedown rifle during Christmas week. The main, and perhaps only, change to the gun was the replacement of the heavy quad-rail handguard with a lighter KeyMod type. The quad-rail equipped rifleÂ tipped the scalesÂ at 7.6 pounds, while the new one shaves off a a full half-pound to drop the rifle’s weight toÂ only 7.1.

The front end felt a bitÂ heavy on the original gun, so I am glad that Ruger decided to upgrade the gun with a KeyMod handguard. Dropping Â½ pound will definitely be an improvement.

I like KeyMod and its main competitor M-LOK. Since Ruger is teaming up with Magpul, the creator of the M-LOK standard, I am a little surprised that the company did not go with M-LOK. 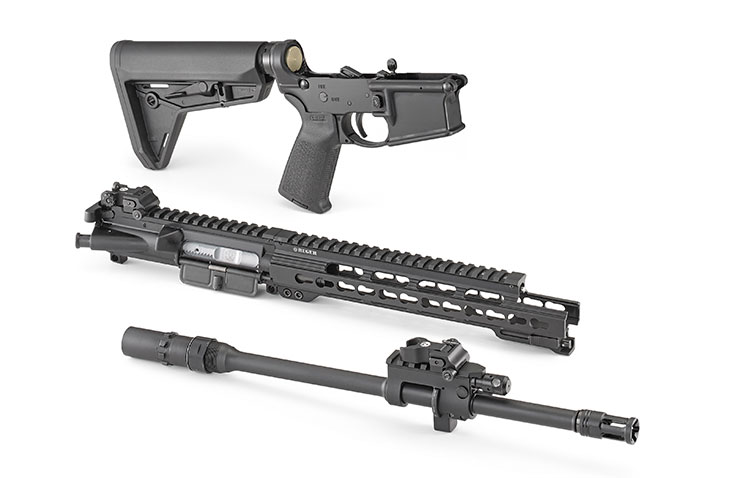 Regardless, KeyMod will give the handguard a thinner and lighter feel while still providing plenty of options for adding accessories such as a weaponlight or vertical grip.

If you are not already familiar with the SR-556 Takedown, it is a variation on the original SR-556 rifle. The main difference is the gun can be taken down quickly for more compact storage or to change calibers. In just a few seconds, theÂ barrel can be swapped out to change from 5.56 NATO to 300 BLK. Since both the magazines and bolt are the same in each caliber, nothing other than the barrel need be changed.

The rifles use a piston system instead of a DI-type system. There is much debate on which of the two systems is better, but I have found both tend to work well when set up properly. One of the main benefits with the piston guns is the reduction in fouling that gets into the chamber. However, they tend to be more expensive and can weigh more than a direct impingement gun.

I recently completed a review of the SR-556 Takedown for Harris Publications, and I will write a review of the gun here as well. I found the gun to be a solid performer with both 5.56 NATO and 300 BLK ammo, and the gun held zero due to all of the adjustments being made on the front sight.

Ruger also makes a SR-762 rifle that is chambered in 7.62×51/.308. No word on any intentions by the company to make a takedown version of that gun.

The pricing remains the same at $2,199. The company does not list the original gun at all on its website suggesting the quad-rail gun will no longer be available.

These new rifles will be on display at the SHOT Show next month. I hope to put my hands on one and see how it feels.