Ever since Ruger and Federal introduced the .327 Federal Magnum in November of 2007, I have been intrigued by the potential of this caliber.Â  Granted, any new firearm caliber has a serious uphill battle to be accepted by the general shooting public.Â  But, the .32 has been around and used for self-defense since the 1800s.Â  Let’s be honest…the .32 has never been known as a “man-stopper,” but is has had a small portion of the firearms market. Could the .327 Federal Magnum make the .32 a serious self-defense caliber?

After Ruger’s introduction of the SP101 chambered for the new cartridge, Charter Arms released the Patriot series of revolvers chambered for the .327 Federal Magnum. In the Jan/Feb 2009 issue of American Handgunner, John Taffin tested the Patriot and gave his opinions on the gun and caliber.Â  Out of the 2.2″ barrel on the Patriot, the 115 grain Speer Gold Dot was smoking along at about 1230 fps for more than 385 foot-pounds of energy.Â  The milder-recoiling 85 grain Federal JHP was in the 1220s with more than 280 ft-lbs of energy.

Those are respectable numbers for a self-defense firearm, especially when you consider they are coming out of a 2.2″ barrel.Â  In a short carbine, I imagine the .327 could be a fantastic small game gun.

To my knowledge, no one has been forced to use a .327 Federal Magnum in a self-defense shooting.Â  Without a stack of positive results from “the street,” I’m hesitant to recommend this caliber.Â  However, if you prefer a .32 caliber firearm, the .327 is a vast improvement over the .32 H&R Magnum and its predecessors.Â  With speeds in the 1200’s, the bullet will expand after striking, unlike the bullets out of the weaker .32’s.

Update – Speer added another Gold Dot load for this cartridge. The new load uses a 100-grain bullet that is rated at a blistering 1,500 fps. This is exceptionally fast. I would imagine that this load in a lever-action rifle would be incredible. It should be more than adequate to provide for home defense and could even be a decent combination for taking small to medium size game.

Another Update – Ruger no longer makes the SP101 with a 3″ barrel for this cartridge. They do make the gun with a 4.2″ barrel for it now. While you get the benefit of additional velocity, I wonder how much harder it is to conceal the gun. In an IWB, it should not be a problem. However, in an outside the waistband rig, the extra barrel length may be visible from under a short jacket. 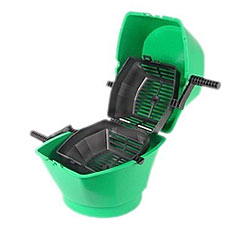 Like a lot of shooters, I reload my own ammunition. Cleaning the brass before running through the sizing and seating processes is always a good idea. I’ve tried washing the cartridge cases with various cleaning products, but have always come back to tumbling with walnut and corn cob media.

Separating the cases from the media has always been a bit of a chore for me. Not terribly difficult, but not very easy either. I have tried different sifters and separators, but never found one I really liked. That all changed when I bought the RCBS Rotary Case Media Separator.

This media separator is simple and it works! Two large halves form a clamshell-like case that catches the media in the bottom half, while the top half closes to trap the dust and significantly reduce noise. Inside the case is the separating device: another, smaller clamshell-like case with sifting holes and rotating handles.

The system is easy. Open the outer case and the inner separator. Pour the media and brass out of the tumbler into the separator. Close the separator and outer case. Turn the handle a few times and you are done. All of the media has dropped into the lower part of the case, leaving you with just shiny brass in the separator.

In my experience, the separator holds about 500 .38 Special cases and media. More than enough for most of the tumblers on the market.

Cleaning the RCBS Media Separator is easy: just wipe it down or hose it off. It is all heavy-duty plastic, so there are no parts to rust.

I was pleased with the ease in which the whole system works. I was also very impressed by the reduced noise from this device as compared to other media separators.

Click here to get your RCBS case separator today from Amazon.

According to Ruger, the “LCP” initials stand for Lightweight Compact Pistol. It would appear it gets that name for good reason. Weighing only 9.4 oz unloaded, the polymer-framed gun has an overall length of only 5.16″ and a width of a mere 0.82″. The barrel is 2.75″ long and the trigger pull is an even 8 pounds.