The Smith & Wesson Model 57 Classic is a modern version of the original 57 that was introduced in 1964. The Classic Model 57 was introduced by S&W at the 2009 SHOT Show.

END_OF_DOCUMENT_TOKEN_TO_BE_REPLACED

Smith and Wesson is now producing all of the M&P pistols with optional thumb safety.

The ambidextrous manual safety is now available on the full-sized and compact 9mm, .40 S&W, and .357 Sig.Â  The manual safety was originally developed by S&W for the M&P 45, which was developed for the U.S. armed forces trials that never happened.Â  Now the safety has been carried over to the rest of the M&P line as an option.

All specs on the M&P pistols with the thumb safety remain the same as the pistols without the manual safety. Â The thumb safeties are large and easy to manipulate. Â They are designed to mimic the 1911-style safeties but are easier to operate.

While the 1911 was an amazing military gun for its time, if the military is serious about upgrading sidearms, they need to abandon the 1911 concept and go after what works. Â Frankly, the most reliable handguns on the market today are the polymer-framed, striker-fired handguns that do not have a bunch of switches, safeties and doo-dads. Â The Glock line of handguns and the M&P (sans safety) help prove that point.

I’m not suggesting the 1911 is not a fine firearm because it is. Â I’ve got a Colt 1911A1 in my safe right now. Â But it is in my safe. Â The gun on my hip right now is a Glock 19. Â Why? Â Because the G19 is just more reliable. Â And in a violent encounter, I’m not looking for style points, I want a pistol that will reliably put holes in the target and stop the threat. 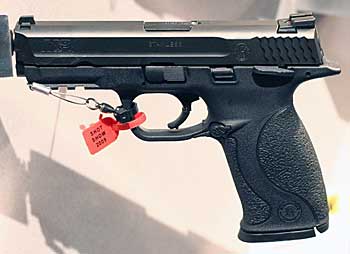 At the SHOT Show, I got to see the new guns. Â I worked with several different M&P pistols and found the safeties worked very well.Â  I wasn’t sure I would like them, but they were easy to manipulate, clicked smartly into place, and did not interfere with my grip.Â  I don’t know that I would order an M&P with a thumb safety, but I certainly would consider it.

Two of the most popular Smith and Wesson handguns, the models 442 and 642, have been re-introduced without the infamous internal locks.Â  These J-frame snubbies are the classic blued and stainless steel .38 Special revolvers with the internal hammers.

Perfect for pocket, ankle, and other forms of concealed carry, these revolvers have been great sellers for Smith and Wesson for many years.Â  Like all S&W revolvers, in recent times, a consumer could only buy these with the internal lock.Â  Unfortunately, these locks have had a few problems and consumer confidence in them is very low.Â  Smith and Wesson have listened to their customers and brought these two classic J-frames back without internal locks.

I am a proud owner of the model 642-1 that I bought more than 10 years ago.Â  It is a great gun!Â  I have carried it daily in a pocket and on an ankle.Â  It has always performed perfectly and is very accurate.Â  I have no doubt these new models will be outstanding revolvers.

Smith & Wesson updated the 442 and 642 line with “Pro Series” models. Â The difference: Â they do not have locks – the same as these revolvers. Â Here is what I wrote on the new Pro revolvers when they were announced in December 2009:

END_OF_DOCUMENT_TOKEN_TO_BE_REPLACED

The new Smith and WessonÂ M&P15R is a rifle chambered in 5.45×39. Â S&W developed this new AR variant due to the rising costs of .223/5.56 NATO ammunition. Â The 5.45×39 cartridge was developed for the AK-74 rifle in the early 1970s. Â Few guns in made the United States are chambered for it, and consequently, surplus ammo is comparatively cheap. Â The 5.45×39 is not interchangeable with the 5.56×45 NATO (or .223 Remington) cartridge which is the standard cartridge AR-15 platform rifles.

END_OF_DOCUMENT_TOKEN_TO_BE_REPLACED

Introduced at the 2008 SHOT Show, the Night Guard line of revolvers from Smith & Wesson offered a blend of high-quality features in self-defense firearms.

Although the guns are no longer manufactured, they represent a high-water mark in 21st century revolvers using conventional technology.