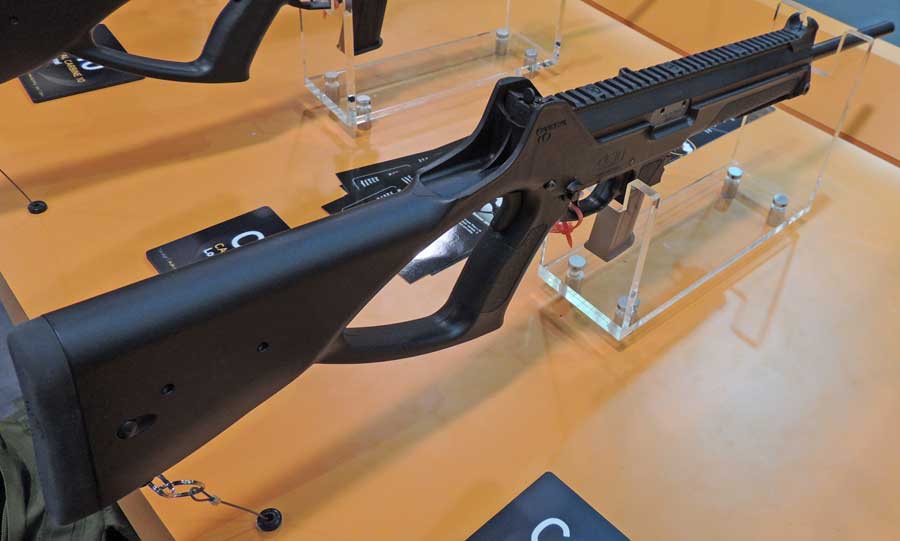 Introduced in the summer of 2012, the 2013 SHOT Show was our first opportunity to get our hands on the new Caracal CC10 9mm carbine.Â  The â€œCCâ€ stands for â€œCaracal Carbineâ€.Â  The CC10 has a steel receiver and barrel, with a polymer frame, however no details were given on the type of steel.

The CC10 will come in (2) variants – the SB (short barrel version) and the LB (long barrel version).Â  The SB versions are marketed towards law enforcement, while the LB versions are promoted to the civilian market.Â  Unfortunately, I was not able to put some rounds downrange with this carbine to truly give it a full review. Â [Ed. note: Â When we were at the morning session of Media Day during the 2013 SHOT Show, Caracal did not have the CC10 at the range. Â  They promised to have it there later in the day, but it was never seen by any of our writers.]

The stock is a fixed rifle style stock that is connected to the bottom of the pistol grip by a curved bar.Â  The opening is much larger than a traditional thumb hole stock, allowing the shooter to get a full wrap around grip on the pistol grip.Â  The grip has a texturized anti-slide pad on each side of the grip.

The Caracal CC10 receiver has a full length 1913 Picatinny rail, while there is a shortened rail on the bottom of the synthetic hand guard.Â  There is enough room behind bottom rail for a secure support hand grip on the smoother frame, or obviously the shooter could add the fore grip of their choice on the rail.

There is a bolt release lever on the left side of the action, but I would have really appreciated a lever that was just a little bit longer on the CC10.Â  Although probably designed to avoid snagging on objects, or on the shooterâ€™s own gear when slung, the lever barely sticks out from the side of the CC10’s receiver – maybe an inch or just over.Â  This is what I would put in the category of â€œwishâ€ and not â€œproblemâ€.Â  The width is just about right – not too big, but not to small. 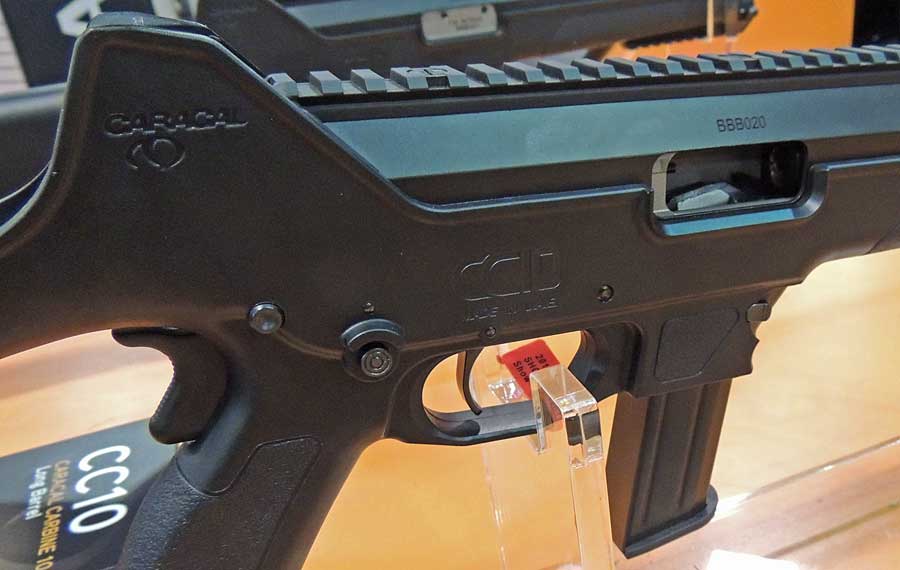 There are four separate safety devices on the Caracal CC10 – a manual safety, trigger lock, bolt lock, and firing pin lock.Â  The manual and trigger lock safeties are external, while the other two are internal.Â  The manual safety is a standard push bar style safety located at the top, front of the pistol grip, just behind the trigger.Â  It is high enough not to interfere with a good grip.Â  The trigger lock safety is similar to a 1911 grip safety, where the shooter must depress a lever on the back of the grip in order for the weapon to fire, even if the manual safety is disengaged. 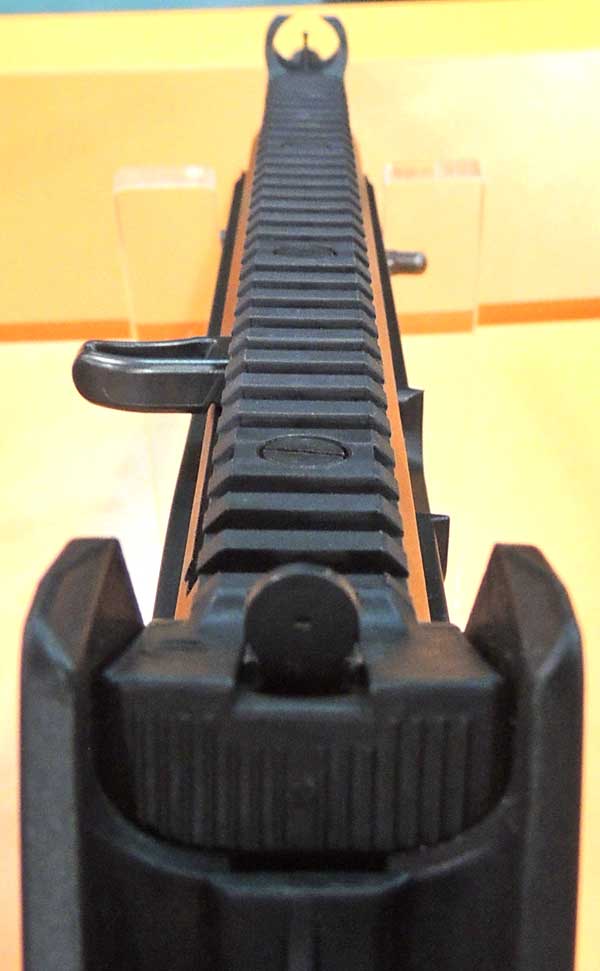 It is the rear sight I have a real problem with.Â  It is a slide adjustable circle sight with a pin hole in the center.Â  Think about iron sights on an AR-15 with the long range sight flipped up.Â  Yeah, its that small.Â  For anyone attempting to use this for self-defense, home-defense, or law enforcement, a separate optic will have to be purchased.Â  The rear sight just does not allow for a fast sight acquisition during a stressful situation.

Not that I wouldnâ€™t probably add a nice red dot optic to the Caracal CC10 anyway, but they should have an independently useable iron sight as a back up.Â  With the rear sight not having a flip down feature, the shooter really couldnâ€™t co-sight the iron sights with a red dot sight.Â  Not to mention that both sights probably are not high enough to accomplish that feature.

Thatâ€™s really too bad, because every one who shoots knows Murphy, and when you really need to shoot, and your fancy holographic sight goes down, youâ€™d really like to have back-up iron sights ready to go.Â  These sights will not do that.

The CC10 uses Caracal magazines that come in capacities of 10, 15, and 18.Â  The magazine release is an ambidextrous button release located at the front of the magazine well.Â  The great thing about the CC10 is that the magazines from their pistols are interchangeable with the CC10 and vice versa. 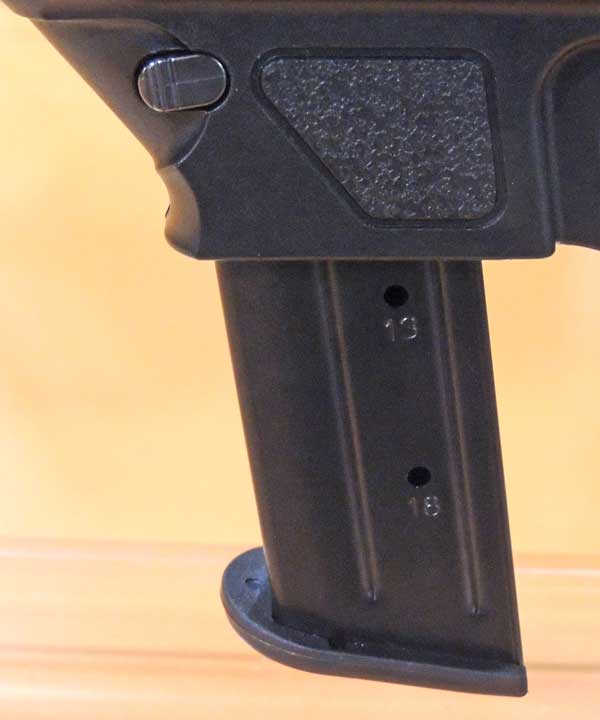 For someone in the tactical market that is a huge plus, as you can continue to feed your long gun from your pistol magazines, instead of having separate magazines or sometimes ammunition types.Â  If the long gun goes down you can then supplement the pistol with your carbine magazines. 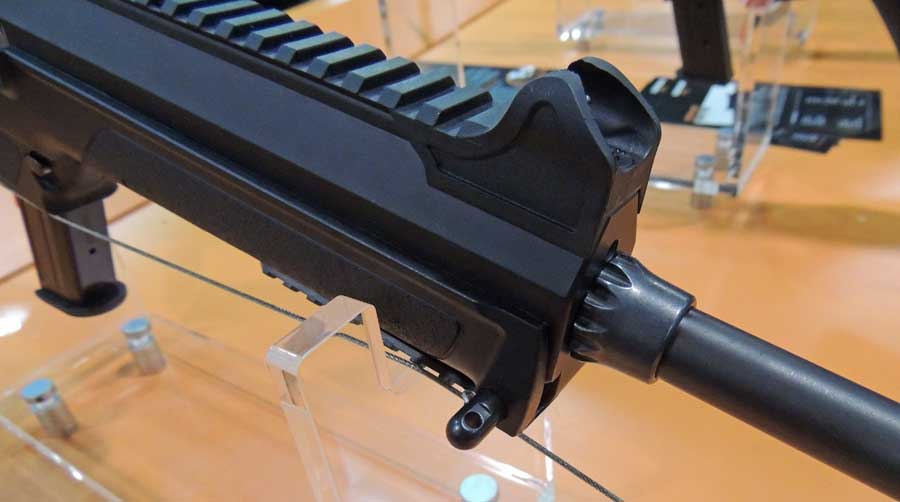 This comes back to the point I made in the first paragraph.Â  In a time where the entire firearms market has been turned up-side-down, and the availability of anything AR-15 is over a year out, Caracal is offering what appears to be a viable alternative.Â  There reps at SHOT Show said they planned on shipping in â€œtwo to three monthsâ€.Â  Considering that Caracal is fairly unknown, anyone in the market for a carbine rifle may have an opportunity to actually put their hands on one.Â  And for only $600 MSRP Iâ€™d say that option could very well be a reality.

At this time, the CC10 is no longer listed on the Caracal website. Â Other new firearms have been introduced, and it appears the company is shaking up the product line. Â It is not known if Caracal ever shipped a CC10 in the US or international market.

[…] significant changes. Â Previously, there were three rifles/carbines shown by Caracal: Â the CSR, the CC10 and the 816. Â Of those, only the 816 remains in the catalog. Â Newly introduced are the CH300, […]